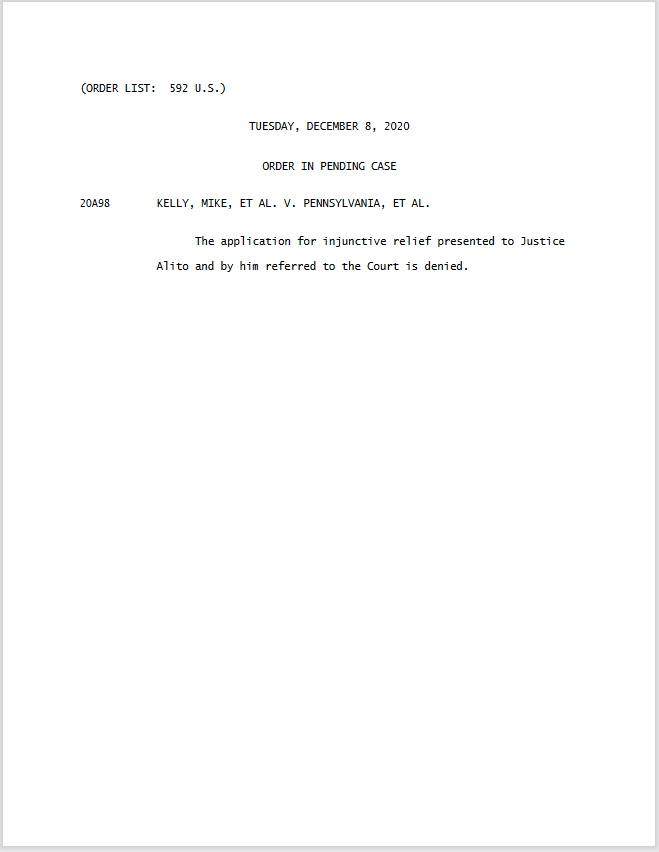 But it speaks volumes in terms of what it’s telling to Trump and his minions in their attempt to soft-coup the 2020 presidential election.

The Supreme Court on Tuesday denied a last-minute attempt by President Trump’s allies to overturn the election results in Pennsylvania, a blow to the president’s continuing efforts to reverse his loss to Democrat Joe Biden.

The court’s brief order denying a requested injunction provided no reasoning, nor did it note any dissenting votes. It was the first request to delay or overturn the results of last month’s presidential election to reach the court, and it appears that Justice Amy Coney Barrett, Trump’s latest nominee, took part in the case.

The lawsuit was part of a blizzard of litigation and personal interventions Trump and his lawyers have waged to overturn victories by Biden in a handful of key states. But time is running out, and the electoral college is scheduled to meet in less than a week.

Tuesday afternoon, just before the court’s order was released, Trump appealed for help in his boast that he had won, rather than lost, reelection.

So even his ham-handed attempt to pack the Court with his sycophants didn’t work, and while he will go to his grave believing he won, what “everybody in this country knows” is that he lost to the man who won the most votes ever in an election and by the same margin of electoral votes that he’s been bragging about nonstop for the last four years.

Maybe now one or two more Republicans than the 22 so far on the record will admit that this farce that would make the Marx Brothers blush is over.