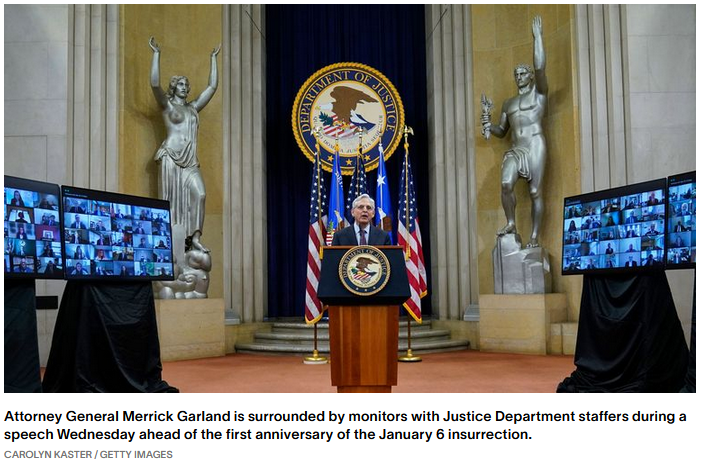 There will be a general disappointment in some quarters that Attorney General Merrick Garland did not arrive for his speech on Wednesday with a chain of human heads behind him. This, I think, mistakes what the speech was really about.

First, it was a memorial of the first anniversary of the attempted overthrow of the 2020 presidential election. As such, there were elegiac elements to the address that were wholly appropriate. Second, nobody ever is going to mistake Merrick Garland for William Jennings Bryan. He burns no barns. He busts no blocks. He rouses no rabble. But it’s more than a little unfair to judge what he said Tuesday by either of those standards. He said a lot more than he’s usually given credit for saying. For example, this is a signifying paragraph:

“DOJ remains committed to holding ALL 1/6 perpetrators, at any level, accountable under the law whether they were present that day or were otherwise criminal responsible for the assault on our democracy. We’ll follow the facts wherever they lead…I understand that this may not be the answer some are looking for. But we will and we must speak through our work. Anything else jeopardizes the viability of our investigations and the civil liberties of our citizens.”

More pointedly, Garland cited the Watergate investigation in defense of the pace and mechanics of the Justice Department’s investigation. This is a lethally important point. There was a long period of time in which it seemed as though the actual investigation would never get past the White House gates. For example, back in 1974, there was tremendous impatience among the Democratic majority in the House of Representatives at how slowly they perceived the Judiciary Committee’s impeachment inquiry was moving. Yet, one day, committee counsel John Doar showed up with a binder containing his statement of the case against Richard Nixon, and the fight was over at that moment. It was thinking about John Doar that reminded me that Merrick Garland convicted both of the Oklahoma City bombers after an investigation that did not leak a drop.

It was a good speech that did everything it was supposed to do. It paid proper respect to the dead and wounded of January 6, 2021. It linked what the DOJ is doing now to the DOJ’s original purpose—which was to protect the lives, rights, and the franchise of newly freed Black citizens in the South in the years after the Civil War. In doing that, he tied the insurrection itself not only to the actions of the previous administration*, but also to the voter-suppression campaigns by Republican politicians that preceded January 6, but which has accelerated in the days since. He even cited John Doar’s work for Attorney General Robert Kennedy in working for voting rights in 1961.

It was a big circle, and Garland drew it perfectly.

One bark on “The Past Is Prologue”