On November 11, 1918 the guns fell silent across Europe, marking the armistice that brought an end to the fighting in World War I. It used to be called Armistice Day. Today is the official holiday to commemorate Veterans Day.

In Canada, today is called Remembrance Day.  Perhaps that is the proper name for it because as time passes — it’s been 103 years since the armistice — we tend to forget the ones we lost.  Painfully, there have been more recent wars that have given us more names to remember and the living to honor.

It’s become my tradition here to mark the day with the poem In Flanders Field by John McCrae. 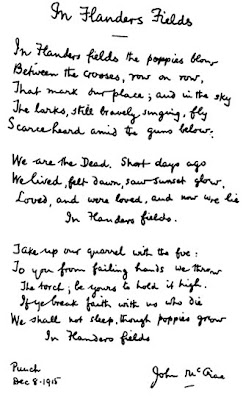 In Flanders fields the poppies blow
Between the crosses, row on row,
That mark our place; and in the sky
The larks, still bravely singing, fly
Scarce heard amid the guns below.

We are the Dead. Short days ago
We lived, felt dawn, saw sunset glow,
Loved, and were loved, and now we lie
In Flanders fields.

Take up our quarrel with the foe:
To you from failing hands we throw
The torch; be yours to hold it high.
If ye break faith with us who die
We shall not sleep, though poppies grow
In Flanders fields.

I honor my father, two uncles, a cousin, a great uncle, many friends and colleagues, and the millions known and unknown who served our country in the armed forces.

One bark on “Veterans Day”