The cover art of a magazine often tells the story better than the articles inside.

Trump dummied up a cover of Time magazine glorifying himself to display at all his properties.

The framed copy of Time magazine was hung up in at least five of President Trump’s clubs, from South Florida to Scotland. Filling the entire cover was a photo of Donald Trump.

“Donald Trump: The ‘Apprentice’ is a television smash!” the big headline said. Above the Time nameplate, there was another headline in all caps: “TRUMP IS HITTING ON ALL FRONTS . . . EVEN TV!”

This cover — dated March 1, 2009 — looks like an impressive memento from Trump’s pre-presidential career. To club members eating lunch, or golfers waiting for a pro-shop purchase, it seemed to be a signal that Trump had always been a man who mattered. Even when he was just a reality TV star, Trump was the kind of star who got a cover story in Time.

But that wasn’t true.

The Time cover is a fake.

In fact, the cover on display at Trump’s clubs, observed recently by a reporter visiting one of the properties, contains several small but telling mistakes. Its red border is skinnier than that of a genuine Time cover, and, unlike the real thing, there is no thin white border next to the red. The Trump cover’s secondary headlines are stacked on the right side — on a real Time cover, they would go across the top.

And it has two exclamation points. Time headlines don’t yell.

“I can confirm that this is not a real TIME cover,” Kerri Chyka, a spokeswoman for Time Inc., wrote in an email to The Washington Post.

How pathetically needy do you have to be to do this kind of stuff?  I get it if you’re a twice-divorced narcissist who needs the attention and adoration of your golfing buddies so you can brag about the Air France flight attendant who winked at you in the TSA line, but seriously, no one buys the act, or the trained-cat hair hat and dye job.  Nice picture, fella; sorry about your tiny little whatever.

As president, this is the kind of thing that goes on in North Korea.

Via David Dickinson at Universe Today, there was celestial pas de deux between the Moon and Venus this morning.  Here’s a shot from my camera phone of the meeting over Miami.

That little red dot up and to the right of the crescent moon is Venus.  The pictures at the link above are much better.

Speaking of photos, about a year ago a friend sent me a photo of a young man whom she thought looked like what she imagined one of the characters in one of my plays looked like.  I didn’t know where she got it; I assumed it was either in the public domain or that she had taken it herself.  I later used the photo in a blog post.  The other day I got an e-mail from the subject of the photo asking me to remove it since I didn’t have his permission to use it.  I immediately complied with his request and apologized.

I have resolved from now on to try to avoid using photos that either I didn’t take or can’t locate the source, and to include a credit or link where possible.  Good advice in this ever-expanding digital age; I know how I’d feel if someone used my work without credit or permission.

In which I channel Charlie Pierce:

My Facebook feed this morning was a’glow with angry liberals protesting the appearance of Dzhokhar Tsarnaev on the cover of the most recent Rolling Stone. The conservative reaction was predictably worse.  I decline to be outraged. The cover line, for anyone willing to read it, talks about how Tsarnaev “became a monster.”

The article by contributing editor Janet Reitman is titled “The Bomber: How a popular, promising student was failed by his family, fell into radical Islam and became a monster.”

Is there any serious argument to be made about any of that? Tsarnaev wasn’t born to be a terrorist. (OK, there are people who believe that he was, but they are bigots and can be ignored.) He was made into one, and he went along with the program and he did, indeed, become a monster. And if all we’re fighting about is the quality of the cover picture, then we’ve trivialized his what he did beyond all recognition.

Everybody calm the hell down.  It’s a magazine cover.  Sheesh. 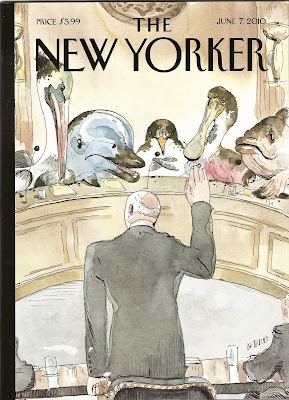 A great cover by Daniel Clowes for The New Yorker this week. 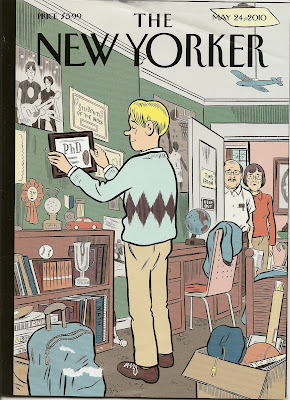 Wow, does this bring back some memories…. Thanks, Mom and Dad. 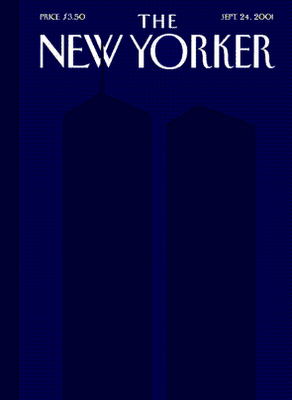 9/11/01 by by Art Spiegelman for The New Yorker
The true crime is that the man who caused this is still alive and free, and the people most responsible for the effort to capture him and bring him to justice don’t really care.