President Obama had some fun with the GOP candidates whining about the CNBC debate last week.

President Obama on Monday mocked Republican presidential candidates as thin-skinned for lashing out at CNBC over the network’s handling of last week’s primary debate.

“They say, ‘when I talk to [Russian President Vladimir] Putin, he’s going to straighten out,'” he said at a Democratic National Committee fundraiser in New York City. “And then it turns out they can’t handle a bunch of CNBC moderators.”

“If you can’t handle those guys, I don’t think the Chinese and the Russians are going to be too worried about you,” Obama added.

A Nebraska woman identifying herself as the “ambassador” for plaintiffs “God and His Son, Jesus Christ,” is suing all homosexuals on Earth for breaking “religious and moral laws,” according to court records filed Tuesday.

In the suit, entered into the docket as Driskell v. Homosexuals, Sylvia Ann Driskell, 66, of Auburn, Nebraska, asks in a seven-page, neatly handwritten petition (PDF) that U.S. District Judge John M. Gerrard decide once and for all whether homosexuality is or isn’t a sin.

The suit doesn’t cite any case law under which a judge could make such a determination. In fact, it cites no court cases at all, quoting Webster’s Dictionary and numerous Bible verses, instead, to bolster Driskell’s central contention, which is:

“That homosexuality is a sin and that they the homosexuals know it is a sin to live a life of homosexuality. Why else would they have been hiding in the closet.”

Driskell writes, “I’m sixty six years old, an [sic] I never thought that I would see the day in which our Great Nation or Our Great State of Nebraska would become so compliant to the complicity of some peoples [sic] lewd behavior.”

The suit was noticed by several gay activists and writers, including Dan Savage, the advice columnist, who said, “Man, I hope I get deposed!” and Steven Payne, a self-described “gay feller,” who wrote in The Daily Kos:

“Brian (his husband) and I will be liquidating our assets in preparation for a certain loss. We anticipate the restitution ordered to this woman will take us down to our very last penny. In the meantime, our fear is so great we have ceased and desisted being homosexual.”

She will be hearing from my lawyer.

President Obama is going to Kenya in July to participate in a summit on global entrepreneurship… or so the White House would have you believe.  I think he’s doing it just to get a rise out of people like this doofus.

Former New Hampshire Gov. John Sununu (R) said on Monday during an appearance on Fox News that President Obama is “inciting” birther conspiracy theorists by planning a trip to Kenya this summer.

“I think his trip back to Kenya is going to create a lot of chatter and commentary amongst some of the hard right, who still don’t see him as having been born in the U.S.,” Sununu said on the show “America’s Newsroom.”

“I personally think he’s just inciting some chatter on an issue that should have been a dead issue a long time ago,” he said.

It’s like throwing the invisible ball for the dog: hours of endless fun.

One of the reasons I would not make a good lawyer is because case histories and rulings do not strike me as page-turning can’t-put-it-down reading.  Judges have to be restrained and very detailed in what they put in their opinions because the law and precedent demand it.  But every now and then there comes a judge who can plant a kernel of humor.  For example, Justice Elena Kagan in a Supreme Court ruling yesterday:

Permission to gigglesnort, your honor.

Sen. Thom Tillis, R-N.C., asked Graham during a hearing if he was “working on grandchildren.” The Republican felt the need to invoke the colorful legacy of his fellow South Carolinian in his response.

“Not mine, but others, yeah,” Graham said. “I guess if I did the Strom thing it’s possible. But I better get started.”

The chances of Lindsey Graham having grandchildren the same way Strom Thurmond got them are about the same as mine.

South Carolina Sen. Lindsey Graham, who is toying with the idea of a presidential bid, joked in a private gathering this month that “white men who are in male-only clubs are going to do great in my presidency,” according to an audio recording of his comments provided to CNN.

I’m sure he was joking, but just in case, boys, update your profile on Manhunt.

Benjamin the Beagle tries to blend in.

Sen. Marco Rubio (R-Fla.) said asking whether a politician has ever tried marijuana is a “worthless question” in American politics.

Rubio, a potential 2016 candidate for president, has consistently dodged the question about if he experimented with the drug as a younger man. In an interview that aired Monday from ABC News-Yahoo News, Rubio reiterated that answering the question honestly is a lose-lose.

“Here is the problem with that question in American politics,” he said. “If you say that you did, suddenly there are people out there saying it is not a big deal, look at all these successful people who did it. And I don’t want my kids to smoke marijuana. And I don’t want other people’s kids to smoke marijuana. I don’t think there is a responsible way to recreationally use marijuana. On the other side of it, if you tell people that you didn’t, they won’t believe you. So it is just a worthless question.”

Translation: Of course I lit up but there’s no way I’m gonna tell you I did.

The very idea of Marco Rubio stoned makes me giggle.

Taking the debate on Santa’s ethnicity to a new height — that of hilarity — Sen. Al Franken (D-MN) suggests to NPR that the jolly old elf might be Jewish.

The Senate is expected to vote today on the bipartisan budget act of 2013, and it’s likely to pass. In the current toxic political environment, bipartisan is often a dirty word, but as NPR congressional correspondent Tamara Keith reports, the fussing was put on hold at least briefly last night for a gift exchange.

SENATOR AL FRANKEN: Well, why not?

KEITH: Who happens to be Jewish.

FRANKEN: You know, there’s been a lot of controversy about the ethnicity of Santa lately, and he may – maybe, you know, he’s Jewish. He could be Jewish.

Well, why not?  He has to work on Christmas Eve, which most observant Christians take as a holiday.

As NTodd notes, what’s next?  Suggesting that Jesus might be Jewish?  Oy.

This cracked me up no end.

Not according to ace reporter Ben Shapiro, who saw right through it.

While conservatives and liberals consider the political leanings of Washington Post buyer and Amazon founder Jeff Bezos in an attempt to divine how his politics will affect those of the historic institution, the truth appears to be far simpler: the Post is now Bezos’ latest political tool in a crony capitalist effort to work with the Obama administration. How else to explain President Obama puzzling decision last week to roll out his corporate tax plan at an Amazon.com fulfillment center?

It’s like playing with a cat and a laser pointer… hours of endless fun.

Playing off CNN’s breathless fustercluck over the Boston bomber’s non-arrest:

Our Olympic rowing team — especially the second from the left — was very happy to win a medal. 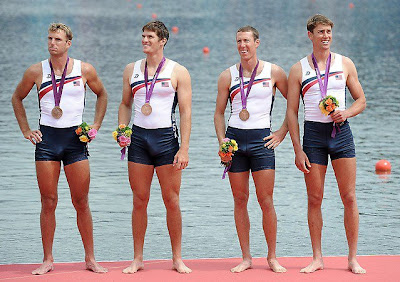 (Click to embiggen… Or nibble on his ear.)
Someone’s pushing the tiller hard a’starboard.

Our Olympic rowing team — especially the second from the left — was very happy to win a medal.

(Click to embiggen… Or nibble on his ear.)
Someone’s pushing the tiller hard a’starboard.