Today is the 30th anniversary of the massacre at Jonestown, Guyana. 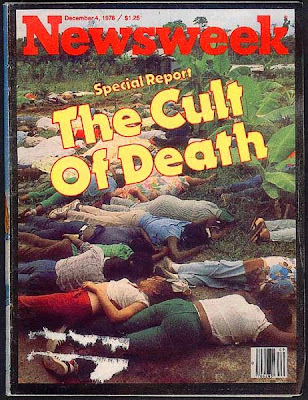 I was working as the news director at a small-town radio station in northern Michigan. I got a call early on a Sunday morning from the weekend DJ calling to ask me where the extra paper was for the AP machine. I told him there was a stash behind my desk, but why did he need it? When I had left the office on Saturday, the machine was fully stocked, and weekends were usually quiet and a roll of paper would last over the two days. He told me the machine had been running non-stop since the bulletins had started coming in about some congressman from California being assassinated in South America.

I turned on the TV and began to get sporadic reports about the story. Remember, this was in 1978; two years before CNN and 24-hour news. I got dressed quickly (I remember distinctly pulling on a sweatshirt from camp with a rearing horse on the front) and went out to the station. By the time I got there I was picking up coverage from CBS radio via WBBM out of Chicago about the shootings of Rep. Leo Ryan (D-CA) and an NBC news crew who were in Guyana to investigate the goings-on at a remote compound run by a preacher from San Francisco. I went to the production office and started listening to the live feed from ABC Radio (we were an affiliate) through the network channel and poring through the miles of print-out from the AP machine, which was still going non-stop, pausing only to update the news and occasionally sending out a bulletin alarm.

I thought about pre-empting our Sunday morning programming — music and a pre-recorded interview program that I did — and going to live feed from the network, but that would have meant dumping a lot of pre-paid advertising, and the station manager wasn’t wild about that idea, and besides, we had very little information about the actual events that were going on. So I made sure that the news broadcasts were up-to-date and parked myself in the manager’s office with his little black-and-white TV and watched the fuzzy pictures coming in from the local stations in Traverse City.

It would be a few days before the awful magnitude of Jonestown was revealed, and when the pictures of the bodies of men, women, and children — hundreds of them — strewn across the lush jungle compound appeared in the newspaper and the news magazines, it was like a nightmare: incomprehensible images and no answers.

I am still mystified by Jonestown. We can say that it was an isolated incident of a large group of people manipulated by a charismatic but insane leader, but history has proved that it is not: witness David Koresh and Heaven’s Gate. The conventional wisdom is that the common denominator in these tragedies is religion and therefore teaches us a harsh lesson about organized faith, but in reality, religion — or rather, a gross perversion of it — is merely the method used by madmen to work their will. They know that faith is a powerful instinct and can be easily manipulated, especially among those who have been ill-treated in life or have little to hope for. Dictators, tyrants, and charlatans have used it to their own ends since time out of mind, and they always will.

We will always ask if something like Jonestown can be prevented. Sadly, as long as there are people who feel hopeless and vulnerable, there will always be people who will exploit them. Even if we recognize the difference between a community joined together by a wholesome and nurturing bond, there is a fine and faint line between that and a toxic and distrusting cult. It is one of the awful truths about human nature that a feeling of belonging can easily be turned into darkness.

I wish we had an answer to this part of human nature. But like Pandora, when we try to close the lid to all the terrible things that come flying out of the box, we can’t forget that hope and faith in ourselves is the one thing that we can count on to get us through the darkness.