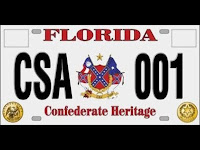 The Sons of the Confederacy may get their specialty license plate here in Florida.

State officials might soon be forced to allow the Confederate flag on specialty plates now that a Central Florida judge refuses to toss out a lawsuit by the Sons of Confederate Veterans, the same group that led to the Homestead Veteran’s Day parade being axed this year.

The Sons of the Confederate Veterans proposed the design four years ago, but legislators did not approve of the idea, likely because of the expected backlash and possible media attention that would come with it.

Not to mention the fact that putting the plate on your car guarantees that it will be vandalized if you park it in certain neighborhoods. (But then again, some of the people who would want that plate drive vehicles that look like they’ve already been vandalized.)

“The people want something and it’s their right to have it,” John Adams, who is leading the license plate crusade, told WESH. “Public opinion doesn’t determine what people’s rights are, the constitution does.”

It’s interesting to note that in his statement, Mr. Adams directly contradicts himself in the space of two sentences. Not only that, his logic about public opinion versus constitutional rights is exactly the the framing that supporters of marriage equality are using to make the case for same-sex marriage. I could be wrong, but I have a feeling that Mr. Adams isn’t a supporter of that cause… or would support a license plate that promotes it.

Florida has over 100 specialty plates supporting everything from protecting manatees and panthers to spaying and neutering your pets, so one more plate won’t make much of a difference. Last year the legislature approved several more but skipped the “I Believe” plate that promoted a brand of Christianity, probably realizing that if they passed that plate, there would be a call for plates that celebrated paganism, Islam, and Judaism — The Quaker plate would be very plain — and that it would be challenged in court. Giving the Sons of the Confederacy their own plate could open the door to groups that memorialize other historic regimes that lost a war, but I have a feeling that Sons of the Third Reich might not get a sympathetic hearing.