Boatboy came over to visit this weekend and we spent Sunday up in Wilton Manors for the 11th annual Stonewall Street Festival and Parade. We left here early enough to get there and get a parking space, and that gave us time to have a cup of coffee and a breakfast snack at Java Boys before the big parade started at 11:00 11:30 noon. (You know how it is with us; never on time but always fabulous.) The weather was perfect; clear skies and a nice breeze to counter the typical Florida summer heat and humidity. We found a nice spot to stand in some shade that had us close enough to the street but also a little up so we could see everything. 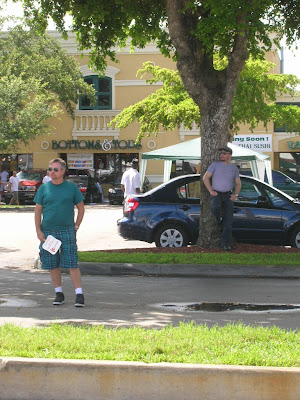 When the parade started there were lots of floats from a lot of different groups; everything from lawn services to pet care to church groups to politicians, all supporting the sizable gay community in the Fort Lauderdale area, and all having a great time. And there were some really impressive costumes; my pictures don’t do them justice. 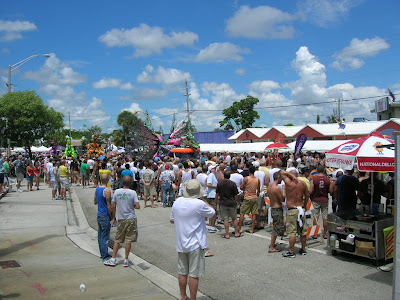 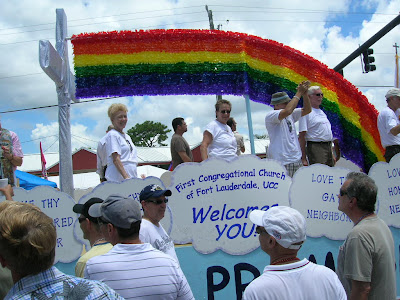 What I enjoyed the most was seeing the amazing mix of people. The crowd came in all shapes and sizes, ages and colors, gay, straight, and any other that you could name that fits in with having a good time with a lot of people (and a lot of loud music).

It also reminded me that over the last year we’ve seen a lot of other marches and parades on the streets of America from the disgruntled melange of the Tea Party and their allies. Whereas they gather to protest against something and someone — often without any idea what they’re talking about in terms of history or reality — the people on the street in Wilton Manors yesterday were there to have fun and enjoy their life and their friends, even though everyone knows that marriage equality and, here in Florida, basic civil rights are denied to the LGBT community. By any measure we have a lot more real things to be angry about with the powers that be than a bunch of cranky white people in tricorn hats. But no one carried an angry — and misspelled — sign screaming about Fascist Gay Bashers or burned Phyllis Schlafly and Pat Robertson in effigy. And if there were people wearing funny hats to represent their cause, at least they were fun. 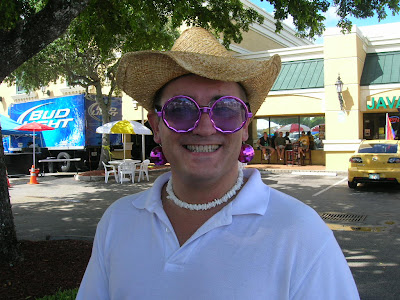 It’s not that the community isn’t aware of the battles we have to fight to earn what it rightfully ours, and it’s not that the forces marshalling against the simple idea of equal protection under the law for same-sex couples and gay adoption aren’t well-funded and full-throated. But if you look back over the last few years, we’ve accomplished a lot; five states allow same-sex marriage, polls indicate a majority of Americans support the repeal of DADT, which is slowly making its way through Congress as a law, not just an executive order which could be overturned by the next Republican president, and openly gay candidates are being elected even here in Florida. No doubt that we still have a long way to go, but against tremendous odds and political pressure, the Stonewall movement has made more progress than all the Tea Partiers have with all their venom and threats of revolution.

And we’ve had a lot more fun.