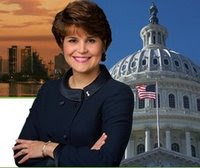 Yesterday I was invited to participate in a blogger meeting with Annette Taddeo, the Democrat who is taking on Ileana Ros-Lehtinen for the 18th Congressional district here in Florida. As it turns out, that’s my district, so I was curious to meet the person who is challenging the entrenched Republican incumbent. I was joined at the campaign headquarters in Pinecrest by Rick from SFDB, Brian from Incertus, and Larry from Miami-Dade Dems, and we got a chance to hear Ms. Taddeo’s story and she got a chance to find out about us.

Two things impressed me immediately. The first was her knowledge of the district and its needs; she’s done her homework and she knows that it’s not as reliably Republican as it once was. She also showed the passion to take on the issues that really matter to her such as health care for children. She said that Ros-Lehtinen’s support of President Bush’s veto of SCHIP was the straw that broke the camel’s back.

Given the fact that the Republicans have no record to run on and therefore will pull out the old “tax-and-spend liberal” mantra against whoever runs against Ros-Lehtinen, I asked her what her plan was to counter this anticipated onslaught. She replied that as a small business owner, she’s anything but the image they’ll try to tar her with (although it’s a given they will). I’m sure they will also say that Ms. Taddeo doesn’t have the experience Ms. Ros-Lehtinen does, but given the record that the Republicans have accumulated, if you haven’t learned from your experience, there’s no point in selling yourself on that point.

A lot of incumbents run for re-election as if it is an entitlement and ignore their opponent entirely. That may not be a given in this case. Ms. Taddeo has been able to raise her profile in the local media, including the Spanish-language TV and radio far beyond those of Ms. Ros-Lehtinen’s previous challengers.

Me. Taddeo knows she has an uphill climb. But given the general disgust a lot of people are feeling with the Republicans and how the district is changing, Ms. Taddeo has a real chance.